It has been said that there is no such thing as an easy slip catch and those who have stood there; be it reluctantly or as an able and willing volunteer can testify to this. However, I was taken-a-back a few months ago when during the recent England vs India Test series the commentators discussed a graphic revealing the best slip catchers in the modern era. They also named and shamed those who were the lowest in their “catch success” percentage. Take a moment to scourer your mind as to the who you think would be in the Top 5 and Bottom 5. It makes for interesting reading and the results are tabulated at the end of this article.

So what is it about slip catching that makes this skill so difficult and specialist? Firstly, the reaction time is often very minimal as the ball is released in excess of 140 kph and then additional force added in the deflection to your hands at slip. In some cases the close distance that one would stand when fielding slip for the spinner also adds to the difficulty level. The ball can also find you at different heights, angles and speeds which makes the catch awkward to take.

Secondly, one of the challenges that faces a slip fielder is the infrequency of the ball coming to them. Put yourself in the shoes of a test match fielder in the slips as the opposition plough along a partnership over 200 and he has been fielding for 2 days without even smelling the ball. Concentration certainly plays a role here to be able to snaffle that chance with minutes to go after a long day in the searing heat.

What can be done to solve these challenges and allow for improved slip catching both individually and collectively as a cordon? A few quick suggestions may open a window to unlocking the inner slip genius.

The first is not rocket science, but it is the most important – Practice. Try as often as you can to replicate the skill as you receive it in the game. Often the slips are neglected at lower levels of the game due to reluctance to train this skill or inability to execute drills which directly correlate to slip catching. There really is no replacing quality repetition, not only will it allow you identify and discover the nuances of slip catching, but also breed familiarity through confidence and volume.

Find the correct slippers. It has for many a year been a position for those who are not the most agile in the field or have graduated through the junior ranks and now as a senior in the team, feel their rightful place is to sleep behind the keeper for a few overs. Recruiting players who are genuinely willing to be in the cordon is a good place to start, that will eliminate the pretenders from the real deal. The next filter should be those who seek improvement and are willing to put the work in, without this attitude you are up against it. Lastly, identify players who have good coordination on the ball. This is pretty easy to spot, but often these tend to be some agile movers and good throwers which creates a conundrum whether to put them in the grabbers or keep them in the outer. This takes some management and each team is different, but when that one chance from their best batsman gets shelled you would wish that you had placed the “man with the mitts” in that position.

Thirdly, find those who work well together. The best slip fielders have seen have been part of a quality cordon. Those that understand each other’s roles and strengths. They have had time to earn trust with each other, to optimize their positioning to cover the most distance and angles and be able to help each other get better through a collective will and accountability. There is no better feeling for a bowler than knowing that if he finds the edge his celebration can begin immediately and no worse one for a batsman who looks back at an eager and impenetrable wall and knows that if the knick is found he is on the way to the showers.

The intricacies of slip fielding technique and tactics are vast and hopefully this provides a good starting point. For drills and more information on this log onto Coach Ed powered by Gary Kirsten Cricket on the Gary Kirsten website and make an application to attend our online courses and workshops. This provides a library of information for players and an accreditation platform for coaches. 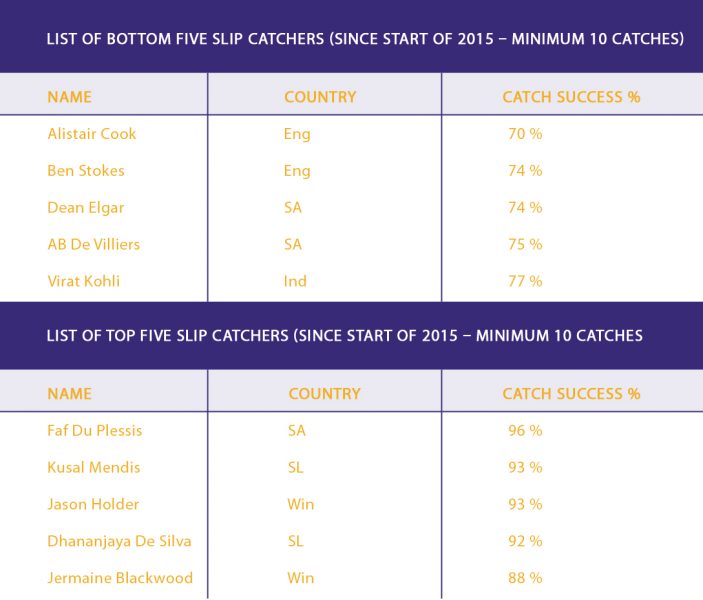